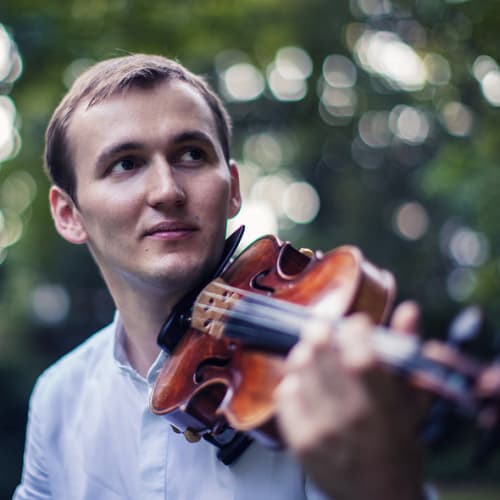 Nikita Boriso-Glebsky is a musician who won popularity with the international music public at a breakneck speed. Making his debut at the age of 10 with Rostov Symphony Orchestra Mr. Boriso-Glebsky was admitted to Moscow Conservatory at 14 and became the youngest solo performer at Moscow Philharmonic Society at the age of 18.

When attending Moscow Conservatory, Nikita Boriso-Glebsky already started performing with Moskovia Chamber Orchestra working his way up from an orchestra  member to the First Violin. In 2005 Mr. Boriso-Glebsky began his doctoral studies writing a thesis on English violin music of the 19-20th century. In 2007 he competed at XIII International Tchaikovsky Competition where he won the 2nd Prize and five more special awards including the Audience Award. In 2008 Mr. Boriso-Glebsky took a three-year internship at Queen Elizabeth Music Chapel in Brussels. Same year he won the Musician of the Year title awarded by Maya Plisetskaya and Rodion Shchedrin Foundation Inc. In 2010 Mr. Boriso-Glebsky won the International Fritz Kreisler Competition in Vienna, International Jean Sibelius Violin Competition and Award for the Best Performance of Sibelius' Violin Concerto. In 2011 Italian Strings Academy and Stradivari Society bestowed the prestigious Virtuoso Award on the musician, while the Sibelius Society of Finland awarded the Sibelius Medal to the violinist for the best interpretation of composer’s music.

Beginning with 2007 Mr. Boriso-Glebsky has been performing as a soloist at Moscow Philharmonic Society and starting with 2011 as a soloist with IMG Artists, the largest performing arts management corporation based in London. In 2013 the violinist won the First Prize at Monte Carlo Violin Masters competition.

The tour dates of the soloist are scheduled a few years in advance. Mr. Boriso-Glebsky regularly performs in Finland, England, France, Germany, Lithuania, Belgium, Italy, Serbia, Poland, Croatia. Despite his tight international schedule the musician puts on a lot of concerts in Russia: his performances in Novosibirsk, Kransoyarsk, Nizhny Novgorod, Samara, Kazan, Kaliningrad, Rostov-on-Don, Vologda and other locations alternate with his concerts in Moscow and St. Petersburg. Mr. Boriso-Glebsky has released CDs and performed over radio and TV stations around the world.