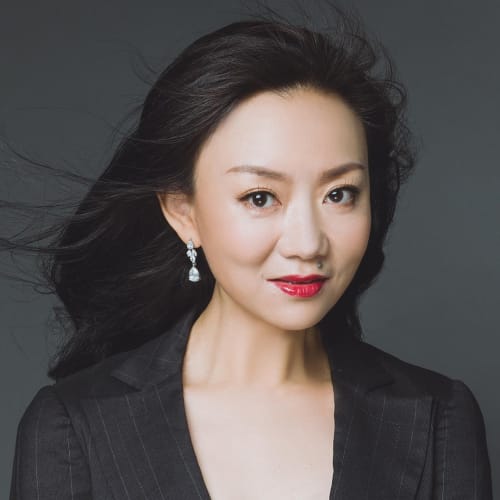 Described by Henry Roth in The Strad as «a significant worldclass artist», Qian Zhou is recognized internationally as a violinist, recording artist and teacher of the first rank.

Born in Hangzhou, China, Qian Zhou had her early training at the Shanghai Conservatory, winning first prize in the China National Competition in 1984. In 1985, she went to the United States where she completed her studies with Berl Senofsky at the Peabody Conservatory, before being also personally mentored by Piero Weiss and Isaac Stern.

At the age of only 18, Qian Zhou received instant worldwide recognition with her brilliant triumph at the 1987 Marguerite LongJacques Thibaud Competition in Paris, breaking all precedent in  the competition’s 50-year history by winning the First Grand Prize and all five major prizes. Her victory and the international attention it drew enabled her immediate access to the major halls and performing opportunities around the globe.

Qian Zhou’s ten CDs with the Naxos, Hugo and Hungaraton labels have embraced a wide range of repertoire from Bach to Bartok and: (.from Bach to Bartok) and also drawn praise of the highest calibre. Her recording of the Beethoven concerto was described by Henry Roth in The Strad as «technically impeccable… burnished with beautifully-focused tone, a vibrato that spans the full gamut of colour, and an astute sense of pacing, all replete with sensitive  nuances. “ He continued «her phrasing is breath-taking; not a note  is ‘wasted’ or ignored, all delivered with a rare nobility of spirit».  Her Glazunov concerto was perceived as «extraordinary: fullblooded, suave and sophisticated, yet uncommonly thoughtful.»  Her recordings of the complete Dvorak works for violin piano were praised as «strikingly confident, each note invested with glowing  lyrical import.»

As the founding Head of Strings at the Yong Siew Toh Conservatory of Music, she has combined her very active performance career with a passion for teaching and has now received high-level endorsements as a master teacher similar to those of her playing, with students already achieving considerable international success in Europe, Asia and America.